Even before Wenzl and Helen Wech joined the Kaipara Moana Remediation Programme they had fenced off their waterways and were underway with native plantings.

Now they have had their first dose of a KMR planting, they are making plans for stage two in 2023.

The long-time Matakohe dairy farmers were first alerted to KMR by Fonterra, which had previously played a role in encouraging the Wech’s to fence off 6km of drains and waterways in recent years.

Five months after signing up to KMR and in the winter of 2022, they teamed up with seven Year 7 and 8 children and two parents from nearby Matakohe School – an historic school founded in 1878 when Kauri forests ruled the local landscape – to help get 2750 native species into the soil during a school day.

The mahi raised $1000 for the school, a contribution the community-minded couple were happy to make, along with having to buy two sacks of pine cones off the business-savvy students!

Despite being hit by a big flood just weeks later, where the torrent of water was over a metre deep as it raged through the newly planted area, only a handful of plants were washed away.

“The KMR planting of Mānuka, Cabbage, Flax, Carex, Coprosma, Oi Oi and Ribbonwood was done in around our waterways to stop any nutrients from entering the Kaipara Harbour. We hope the school comes back in a year, looks at their success and helps with some more planting,” the couple say.

In 2023, they plan to plant more natives around the marshland bordering mangroves on the property.

“Dad always told me you leave a property better than when you got it. To be able to plant natives with the KMR funding is doing two things – beautification and hopefully stopping any pollutants running off our property into the Kaipara Harbour,” says Wenzl.

“Our drive the past ten years has been protecting the native bush and bringing the birds back. There are five patches of mature natives (around 1ha each) around the farm and we want to protect them as much as we want to do more KMR planting. Separate to KMR, we have killed 400 possums since 2021 and killed a swag of wild cats. So now we have all these native seedlings growing in those blocks and lots of native birds coming back.”

Wenzl and Helen acknowledge the Kaipara is a delicate piece of environment and KMR has certainly changed their thinking about farming.

“I would encourage farmers to take advantage of it. It is free money and you are leaving something for the next generation. I think 99% of farmers want to do right by the environment. We struggle to make money at times and it is another cost to do planting but when half of it is paid for jump on board.

“If every dairy farmer can plant even a portion of their land it is going to make the Kaipara look pretty cool. The Kaipara is a delicate piece of environment and the evolution of KMR has certainly changed our thinking about farming,” the couple say.

Separate to ongoing KMR activity on the Wech’s 145ha property, they plan to remove 2ha of pines and replant the block in natives.

Then, in retirement, they want to walk the farm, and enjoy the native trees and its bird life.

The couple’s long-held interest in native trees and birds is clearly continuing to grow as the KMR Programme accelerates. 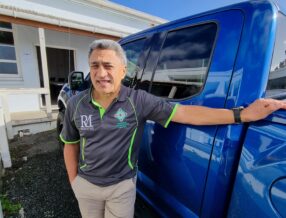 QEII and KMR working together in South Head 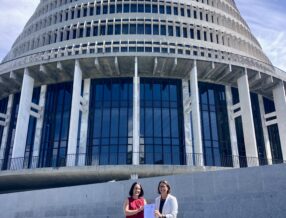